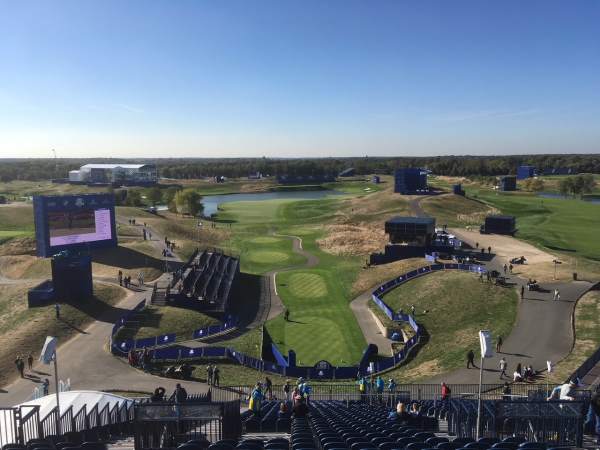 Monday and Tuesday of Ryder Cup week are odd times to be on a golf course, writes Ross Biddiscombe (pictured above). Monday is a settling in day for many people working the event and no paying spectators are allowed on the course. Tuesday is all celebrity and funny stories in the opening press conferences.

The first day of Ryder Cup week (like every other one) is also a day of complaining – if it’s not jetlag because you’ve just flown in from the US, it’s the delays of the RER trains coming to the course from central Paris or the fact that not quite everything in and around the golf course is 100% perfect. TV reporters are testing their equipment, print journalists are battling wifi problems and photographers can never get enough sun. Then there’s the building workforce tacking down the final pieces of carpet on a stairway or moving some electrical cables to a safer position or taking a bit more furniture into a hospitality suite. It’s a snagging day, in building terminology. It’s an imperfect world on the first day of match week, but there are always some

things to look forward to and, if Paris cannot deliver the best food of any recent Ryder Cup, then everyone’s going to be very surprised. Witness moules mariniere and pot de feu for lunch in the Media Centre – no hamburgers here.

Still on Monday and the course looks exceptional thanks to a little rain (quite a change from the very dry almost rainless summer). Course superintendent Alejandro Reyes’ ears must have been burning with all the compliments from the players. The lack of summer rainfall has taken away some of the whispy grass on the edge of the fairways, but there still thick rough in places – it’s totally unlike Hazeltine which had no rough at all. The 1st tee is open for photos today and the grandstand behind it is an immediate talking point – 6,900 seats is the biggest ever and was the structure that took the longest to build.

The opening press conference at the Media Centre was a packed house considering that this was arrival day for the majority of print, radio and TV journalists. European Tour boss Keith Pelley showed up with Ryder Cup Director Richard Hills to witness on the Tiger effect on TV audiences, the Tiger effect on the other US players, the Tiger effect on the team room and a couple of non-Tiger questions. However, Tiger Woods headlines are bound to create more TV viewers, which is commercial heaven for everyone.

The Tuesday Tiger press conference was the best attended by far by the world’s media.. There is no doubt that every sponsor, every commercial partner, every TV executive and many more stakeholders in the business of golf are thrilled that Tiger is front page news again (especially in America). When Tiger plays anywhere – and then plays well – then

Ryder Cup Director Richard Hills may be retiring after 24 years in the job, but there is no sign of any hoopla to mark the ending of his era in charge of all the commercial activities of the European-based matches. As usual, he was happy to stay in the background during the match build-up.

A constant question for captains and players this week is if there’s a social media policy. That is, can the players do a little too much tweeting or Facebooking, especially from within the secure area that is the team room. Neither captain has banned it, but they both want the likes of Twitter fiend Ian Poulter to respect the other players and Poults, for one has said he’s fine with that. However, although the Media Centre is packed with up to 1,000 working press (with another 1,000 in the TV compound nearby), there is no evidence of social media sites taking an interest in the event. The Facebooks of the world (who sometimes are asking questions from their subscribers at other golf tournaments) are missing from this match, relying on traditional press material to be circulated on their site.

Sponsors get involved in different ways besides their giant advertising and marketing campaigns declaring their support of the Ryder Cup. Thanks to BMW for providing the media with refillable water containers and Aberdeen Standard Investments for the handy rucksack. These companies are two of the four Official Partners at the top of the Ryder Cup sponsorship tree. The 2,000 media are all still waiting for a Rolex watch each and a free round trip to Dubai on the Emirates airline…

The early-in-the-week press conferences are full of journalists trying to create some intrigue and headlines. A mickey-taking video by the European team making fun of each other was widely discussed. Captain Bjorn revealed that Justin Rose might not be showing anyone his Olympic gold medal again any time soon, while several impressions of perpetually low-key Francesco Molinari by his teammates made everyone laugh…even the new Open champion himself who took it in good spirit.

Best media question No 1. Your GBN correspondent asking Francesco Molinari what the odds are on him being player/captain in Rome in 2022. “I would probably lose a few years of my life,” he said, so don’t put any bets on it happening.

Most heartfelt press conference answers. Tommy Fleetwood admitting that as a kid growing up in Southport he never attended a Ryder Cup because his family couldn’t afford the ticket prices and also that he was told off for shouting too much when he watched his wife giving birth to their child in 2017.

The most relaxed person at Le Golf National is Phil Mickelson who opened his first press conference by commenting on how great the coffee is here in France. Plus, he couldn’t believe that he ate two pieces of bread at dinner the night before – yes, Phil, French-baked bread is what ALL bread should taste like and it’s worth eating it even if your waistline doesn’t agree.

Pictured top: The best view on the course – the very top of the 6,900-seat grandstand behind the 1st tee. (photo credit Nick Metcalfe)

Golf Business News – Letter from Africa: Pachyderms and other challenges!